Extending the PEX for a Pre-Cased Borehole Print

Standard ShapeArrays (SAAs) come with 1.5 m (5’) of PEX tubing attached at the top. In some cases, it may be necessary to extend the PEX tubing. In these cases, it is recommended that the PEX extension be done using the following procedures.

It is recommended that the additional PEX be purchased in straight pieces (typically approximately 3 m each). When using straight pieces, the X-mark can easily be transferred to the extra PEX piece using a straight edge and a fine tipped marker.

In some cases it may be necessary to use PEX which has been reeled up. In this case, it is difficult to place the X-mark on the extra PEX. In many cases the transferred X-mark will be too imprecise to accurately determine the direction of movement. As such, in these cases, it is recommended that the ShapeArray be fit with a magnetometer during manufacturing in order to know the direction of movement. It is recommended that the following procedure be used to prepare the PEX connection. 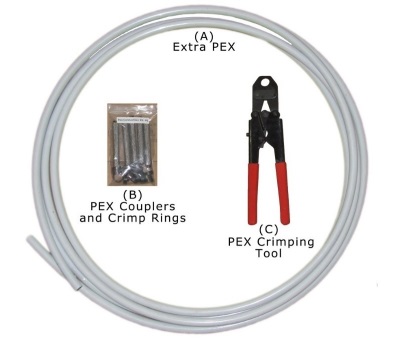 Step 1 - Tap an Extra Set Screw into the Top Stack

Note: If you are using straight sections of PEX, create an X-mark on the extra PEX section prior to extending the PEX.

Tap an extra set-screw into the top stack included in the SAA Install Kit. The extra set screw should be located 90 degrees from an existing set-screw location. This extra set-screw will help provide mechanical support for the ShapeArray during the PEX extension process.

Tighten the set screws to hold the ShapeArray in position during the PEX extension process. Thread extra PEX tubing over cable, making sure to align the X-marks placed on the additional PEX and the ShapeArray. Connect the extra PEX to the ShapeArray using the procedures outlined in How to Use the PEX Extension Kit guide.

Making sure to have a good hold of the ShapeArray, loosen the set screws. Carefully lower the ShapeArray into the PVC conduit making sure not to turn it during the lowering process. If adding multiple pieces of PEX, repeat these steps.