How do I diagnose an unresponsive ShapeArray for cable damage? Print

One of the most common causes of communication problems with ShapeArray™ instruments is damage to the cabling. To diagnose cable damage, you want to determine if there is a short or an open between the various wire pairs within the cabling. Disconnect the instrument’s cable from the Measurand interface or data logger and use an ohmmeter to check the resistance between the wire pairs as described in the table below. 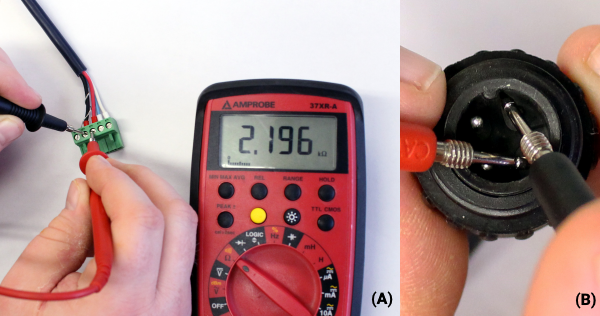 Figure 1: Disconnect the cabling from any interfaces to measure the resistances between wire pairs - (A) 5-pin Phoenix connector and (B) 4-pin Amphenol connector

Since ShapeArray™ instruments contain semiconductors, different resistance results can be produced with different ohmmeters. When checking the resistances between wire pairs, you are looking for a short or an open. These would correspond to 0 or infinite resistance if the wires did not have some impedance, and if measuring tools were able to read an infinite amount of impedance.

NOTE: Because the instruments used to measure the resistance are not capable of capturing infinite impedance, most use a term of Over Limit (OL) to represent an open. Similarly, any readings lower than 1 Ohm typically indicates a short. Measurand recommends consulting your multimeter’s manual for more information on how over limit resistances are reported.

If a failure is found with the 4-pin round connector, inspect the wiring inside the connector to make sure that no wires have been broken or have come loose from the connector.